Steven's also been kind enough to host me on his blog.
To read Steven's interview with me, click here.

An interview with Steven Montano, Author of the Blood Skies series 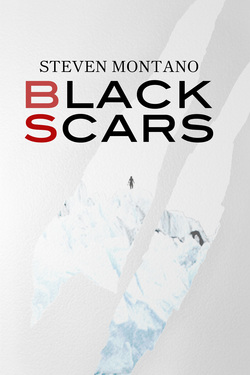 D.H.:  Hi Steven.  I'm really excited that you're here to talk to us today, just a few days before the October 8th release of Black Scars.  That of course means that I get the inside scoop before anyone else does!  Thank you so much for agreeing to fit this interview into your busy schedule.
So far, you’ve written two books for your Blood Skies series, the first one, titled Blood Skies, and the second, Black Scars.  Did you find the writing process to be pretty much the same for both of them, or did you do things differently for the second book?
Steven: BLOOD SKIES was written over the course of just over 2 years, growing from a Nanowrimo project to an eventual novel, with significant mental breaks in between.  BLACK SCARS, on the other hand, was written over the course of about 3 months, over 60,000 words of which came together in the last month.  The editing has been much more efficient and direct, and I had a fairly good idea of where I wanted the novel to go from about the end of Chapter 4.  I also wrote BLACK SCARS in order, which is different from BLOOD SKIES, where Part 1 and Part 3 were inserted later on after the first draft was done.

All in all, BLACK SCARS has been a much more pleasant writing experience.  Everything seemed to click a bit faster, and the entire process has gelled much better.  A lot of that comes from the experiences and mistakes I made with BLOOD SKIES, I’m sure (which were aplenty...)

D.H.: You have some interesting character names in your book; Graves, Cross, Knight and Snow for example.  Is there some significance behind these names or is it just a coincidence that they ‘fit’ so well?
Steven: I’d like to say there’s some hardcore religious or literary significance to the names, but I’d be lying. Mostly it’s because they sound cool.

Much of my writing revolves around aesthetics, and part of the aesthetic of my work is the character names.  It’s important to me that names sound cool, but not be impossible to pronounce.  It drives me crazy when in some fantasy (especially epic fantasy) everyone is names Hexatharadrapkandria and Thezzanoozleore and Dimwitwhogivesacrapaleous.  I don’t want to have to use a pronunciation guide to read the book.

For the characters in BLOOD SKIES, a name is about the feel of the character, but it should also represent something about them, even if not directly.  Cross has a lot of burdens that he bears.  Snow is pale and beautiful.  Graves employs a lot of gallows humor.  Etc.  None of it is terribly deep, but I find the name both influences and is influenced by the character in question.  What I often do is picture the character first, and then try to give them a name that fits.  That’s sometimes harder than it sounds.

D.H.: The Blood Skies series is a post-apocalyptic tale like nothing I’ve ever read before.  Your take on the end of the world is so creative and different, it practically needs its own classification. Could you explain “The Black” to our readers?  They’ve got to hear this!
Steven:  Explain “The Black”...that’s easier said than done, because, to me, what truly defines The Black is how utterly difficult it is to define at all.  In a lot of ways, it defies definition, and that mystery of what it really is part of what makes it so terrifying.

I will say this: The Black isn’t any one thing.  In BLOOD SKIES, it’s thought of us as an event, a turning point in history from which history is recorded after the apocalypse.  In BLACK SCARS, some characters come to think of it more as some sort of malevolent entity.  Neither of those conceptualizations is entirely accurate, but neither of them is 100% wrong, either.

In the prequel, ...SOMETHING BLACK, some more clues are going to be dropped regarding The Black’s origin and true nature.   More and more is learned as the series deepens.
There...hope that was cryptic enough. ;D 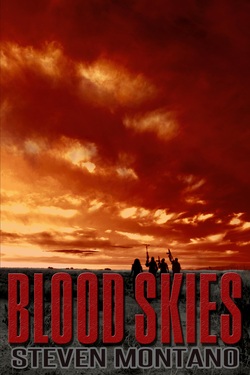 D.H.: If you were to bring any one of your characters to life, who would it be and why?
Steven: The camel. I’ve always wanted one. ;D

D.H.: What inspired you to write the Blood Skies series?
Steven: Most of the prologue of BLOOD SKIES is based on a very vivid dream I had a few years back.  I wrote a short tale based on that dream immediately after waking up, and it was from that tale (as well as a bunch of other random ideas I’d had floating through my brain) that the ideas for the novel grew.

D.H.: What types of audiences do you think would find the Blood Skies series most appealing?
Steven:  Fans of epic and military fantasy will probably get the most out of BLOOD SKIES, but anyone who likes adventure that crosses the line into creepy territory more often than not is also bound to enjoy the books.

D.H.:  You are about to release Black Scars (on October 8th... Woo hoo!)  Is there anything you’re willing to share with us about this book?
Steven:  I’m a huge fan of good sequels, whether it’s films or novels.  Most of my favourite in both categories are“Part 2” tales.  There’s unquestionably something about a good “Book 2” – you don’t have to spend as much time establishing the setting or laying out all of the ground rules.  Even if you left a lot of questions after the first instalment, people will come into the new work with a fairly good idea of“the rules”, which allows you to vault right into your story.

That being said, BLACK SCARS is pretty much an action-packed adventure from start to finish.  The novel is cleanly divided into three parts.  Part One (Reach) involves Cross’s search for the Woman in the Ice in the wastelands called (ready for this?) the Reach.  Part Two (Chains) takes place in the vampire city-state of Krul.  The less I say about that the better, because things get pretty grim.  Part Three (Avenger) takes Cross and his team to the icy city of Kramanganji, where they have to face off with an ancient and dark power.

D.H.:  What’s your plan after Black Scars is released?  Will there be another book in the Blood Skies series?
Steven:  The Blood Skies series is going to be a six book series, plus one (a prequel).  That prequel, ...SOMETHING BLACK, is a novella slated for a December release.  After that I’m tentatively planning to release Books 3 and 4 (SOULRAZOR and CROWN OF ASH) next year, and books 5 and 6 (THE WITCH’S EYE and STORM OF SKULLS) in 2013.  But we’ll see.

I also have a heroic fantasy series called DARKER SUNSET which may or may not ever be released.  The Blood Skies stuff borrows pretty liberally from this earlier series, so I’ll probably have to do some serious re-thinking if I ever want DS to be its own story, and not something connected to the BLOOD SKIES universe.

D.H.:  And last but not least, what can you tell us about yourself that has nothing to do with reading or writing?
Steven:  I’m an avid hiker, biker, and all around Northwest action-hero type.  I’m actually in better shape at age 36 than I ever was in my 20s, which I think is pretty cool.  I also try to eat well, I’ve cut most of the coffee and HFCS (High Fructose Corn Syrup) out of my diet, and my commute involves a ridiculous amount of walking and biking.  It’s not exactly “getting out into the wild”,but I’m not a big fan of cars, and my commute is really one of the only stretches of “alone time” that I ever get, so I just try to enjoy it.  =D

D.H.: Thanks again for popping into my little world to do this interview, Steven.  I wish you every success with your Blood Skies series, and the upcoming release of Black Scars ! 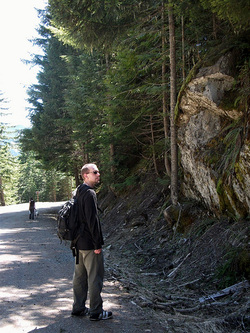 Steven Montano started writing at the age of 18 and never really stopped. A graduate with distinction from the University of Colorado at Boulder, Steven took his Creative Writing degree and became an accountant, instead. He still hasn’t figured out why.

Now, Steven writes the Blood Skies series. His wife runs a popular online yarn shop, and his kids just drive him crazy. They all live in a rain shelter in Washington State.